Since I've cut down the meat to minimum, I am always finding out new ways to substitute it. I love the Mexican food, so I tried how would textured soy protein (TSP) work in a taco filling. It turned out it works great!

For 2 persons you will need:

Other ingredients:
You will also need some taco shells, some sliced vegetables to garnish, and maybe some grated cheese to put on top of the tacos.

You can also make a dressing for the vegetables. Just mix the following ingredients together (adding some water for the right consistency if needed):


First rehydrate the TSP by pouring a little boiling water over it, just enough so it soaks the water completely! Then sauté the diced peppers in a little oil. Meanwhile, turn the oven to 150 degrees Celsius. Remove the peppers to a plate, add a little bit more oil and fry the onions for a minute. Add the garlic and rehydrated TSP, stir and fry a bit, then add the cumin, oregano, chili powder and ground black pepper. Put the taco shells in the oven. Fry a bit more, then add a little bit of soy sauce. Again fry until the mixture gets a bit dry, then add the chopped tomatoes or the tomato pure. Cook for a little while, then check for seasoning. Add salt and pepper to taste. Also, if becoming too dry, add a splash of water, but not too much. The mixture should still be relatively dry.

The taco shells should be heated by now, so take them out of the oven, put on a plate and stuff with the filling. Sprinkle some grated cheese inside and on top, arrange on a plate with sliced vegetables (cucumber, tomato, lettuce, ...), pour the dressing over the vegetables, and serve with some long grain rice.

Now this is both a quick and simple yet very tasty recipe. You need just a few basic ingredients.

- 200g of pasta, whatever shape you like, but good quality
- 3-4 ripe tomatoes, depending on size
- 1-2 cloves of garlic
- 2 Tbs extra virgin olive oil
- handful of fresh basil leaves
- salt, pepper

Brig a pot with enough water to boil, add salt and put the pasta in. While the pasta is cooking, chop the tomatoes into small chunks and mince the garlic. Heat the oil in the pan and fry the garlic on the high heat, very briefly, 15-20, just to release the aroma, do not let it brown. Then quickly add the tomatoes, add salt, pepper, fry for 30 seconds, add the basil, stir, and turn of the heat. The pasta should be cooked by now, so strain it and put it directly into the pan with tomatoes. Mix it all up, and serve with some freshly grated parmesan or grana padano cheese. It takes as long as you need to bring water to boil plus the cooking time for pasta. 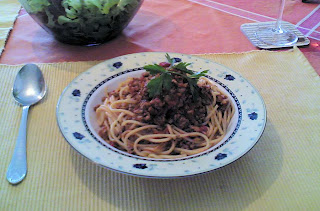 This is a classic pasta dish, but many restaurants serve an awful version of this specialty. I am going to describe the way I do it, and I served it to many people who have been delighted by it.

Chop the onions and fry on some olive oil. If using pancetta, slice it up in small squares and add to the onions. Turn on the heat to max and add the minced beef. Fry while constantly breaking up the beef lumps, so the beef get nice and loose. Use a big pan and a very high heat so the meat fries and not steams. When beef has turned nice and brownish, add the chopped garlic, rosemary and a bay leaf, and fry for another 30 s, then add the wine. Cook until it evaporates then add the tomatoes and, if using, chopped sun-dried tomatoes. Be sure to save the oil, if using sun-dried tomatoes in oil. I is very rich in flavor, which you can use in many ways. I also add 3-4 tbsp of milk at this time and a pinch of sugar.

Simmer for 30 minutes then check the consistency. The liquid should evaporate so that we have a nice thick ragout (meat sauce). Meanwhile cook the pasta al dente and strain. Mix well the 2/3 of the sauce with the spaghetti and some good olive oil. Place the pasta on the plates, and place the remaining 1/3 of the sauce on top. Serve garnished with some parsley and freshly grated parmesan cheese separately. 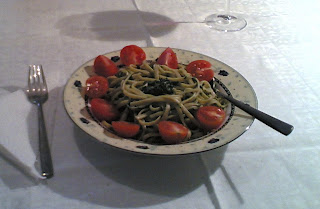 This is a really simple but healthy dish. For pasta you can choose any shape of wholewheat, I used linguine, which are similar to spaghetti but more flat.

Boil enough water, put some salt in it and add the pasta. Meanwhile wash and dry the spinach leaves. Put the spinach, garlic, Parmesan, 1-2 Tbsp water from the pasta, and just a bit of lemon juice in a food processor and whizz to get a fine pure. Salt and pepper to taste. Also cut the washed cherry tomatoes in quarters.

When the pasta is done (al-dente), drain it and put it back into the pot. Put in the cherry tomatoes quarters and the pesto. Toss everything so that all of the pasta gets covered with pesto. Serve garnished with a lemon slice.

This is a simple but very tasty dish, and also quite healthy if lean beef is used. Meat substitutes like Textured Soy Protein (TSP) or seitan can also be used, but then it won't be Chili con Carne, but good anyway, especially if you add vegetarian smoked ham to add some flavour.

First you chop the onions and fry on some olive oil. When the onion turns translucent add the chopped carrot, garlic, and sliced fresh chilies. Then turn on the heat and add the minced beef (or chopped veg. ham plus TSP/seitan). Add the cumin powder, chili powder (if not using fresh chilies), paprika powder, a pinch of ground cinnamon and chopped sun dried tomatoes (if using).

Fry so that the meat turns slightly brown while constantly breaking up the lumps of meat, so that the minced meat gets separated. Pour in the beer and cook until the beer evaporates. Then put in both cans of tomatoes and both cans of beans and ad the oregano. Add a glass of water and cook for 45 minutes or until it reaches nice consistency. Stir occasionally.

Serve in a deep plate with a Tbsp. of sour cream on top and some bread.

I came up with this recipe, because I did not feel like going to the grocery store and had to improvise with things I had. So I used the following:

Cook the rice and the diced carrots in salted water, slightly less than the time stated on the package (1 minute less, or al dente). While the rice is cooking, grind the peppercorns and coriander seeds. Remove the seeds from the chilies and chop them. Also chop the garlic. Now you have everything prepared. Wait until the rice is cooked and strain well. Fry both garlic and chilies for just 20-30s, then add the ground spices. Fry for further 20-30s and add the rice. Add the paprika powder and turn the heat on. Fry the rice as you constantly turn it over so that it gets fried well. This takes about 2 minutes.
Serve sprinkled with fresh coriander or chopped parsley.

Indian cooking also uses a lot of potatoes, which they spice up to a lovely dish.

Fry the onions on some vegetable oil until slightly brown and add the carrots, potatoes and ginger. Fry some more so that the potatoes start to get color. Add the garlic and spices. Briefly fry and stir around, but not to long, as you will burn the garlic. Pour in some water to cover everything, add a large pinch of salt, partially over and leave to cook on low heat until the water evaporates.

Meanwhile cut the tofu in small cubes, sprinkle with salt and fry on some oil until crispy.

If after the water has evaporated, the potatoes are not yet cooked, add some more water so that they cook through. Don't allow to become to dry at the end. Serve on a plate and place the fried tofu on top. Garnish with parsley.

Plain yogurt goes well with this dish, especially if you use chili powder.

This blog is intended for simple and cheap, but healthy cooking. In this fast-food, fast-life age, cooking has become quite neglected virtue for a busy individual. Here I will post recipes and advice which don't hurt your wallet but are good for your health and well beeing. Your comments are welcome.